Video still above from a short video by Amy Jenkins posted here.

I’m excited to be participating in this upcoming WordXWord event at The Mount with a short performance piece that responds to a sculpture called Institutional Tan. The photo of the work posted online immediately made me think of invisibility, mass incarceration, border patrol and caged children. I’m not yet sure what I will perform, but I sense it will be a powerful and cathartic experience ~ at least for me…

Responding to the work, Institutional Tan by James Meyer, an installation consisting of three prison cells located in the woodsy section of Edith Wharton’s country estate in Lenox Massachusetts, multimedia artist, Gabrielle Senza will present a short performance work that brings into focus issues of freedom, trust, betrayal, and regrets.

Walkin’ with WordXWord Tours start from the Stables at 3:00 and 3:30.
Sunday, 26 August 2018. Tours are free, but reservations are encouraged 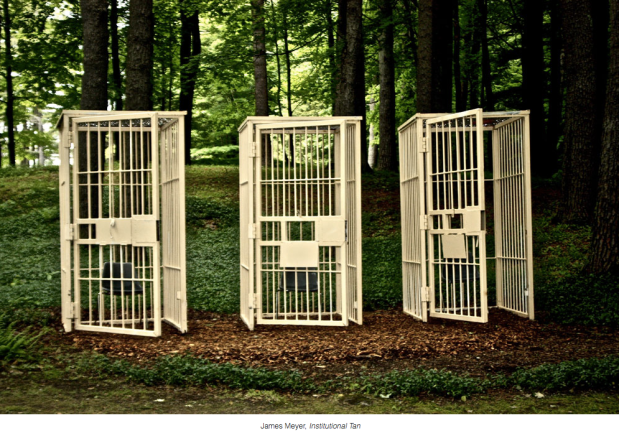 Although I chose this work to respond to based on the image posted online as part of the Open Call, upon researching the artist, his history, and the idea behind the work, my interest in working with this piece grew stronger since it turns out, it was made by the artist who worked as Jasper Johns’s studio assistant for 27 years and secretly sold several million dollars worth of Johns’s unfinished works.

In 2014 James Meyer was sentenced to 18 months in prison for stealing 22 works by Jasper Johns. According to an article in the Wall Street Journal, “Mr. Meyer sold 22 works for a total of roughly $6.5 million, and personally earned nearly $4 million”. He is now free and has returned to living with his family in rural Connecticut.

James Meyer wrote in his essay for the piece: “Institutional tan 3 therapy cells that are functioning and the viewer can use them – these cells were made for inmates that are in solitary confinement for life-they have no regular human interaction and their psychiatrists thought they would benefit form group therapy, these cages were made for them to have group therapy.”

My favorite segment in an article on Jasper Johns published in the Financial Times is Johns’s response to the inquiry about the betrayal by his longtime assistant as the basis for his body of works in the Regrets series:

Sunday, 26 August 2018. Tours are free, but reservations are encouraged

The SculptureNow exhibition will be at The Mount through Oct 31.