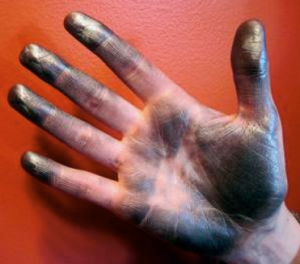 Drawing on the wall

By Jeremy D. Goodwin, Special to the Eagle,

PITTSFIELD — Fine art is often seen as an attempt — even if a vain one — to achieve permanence, a contribution to the artistic tradition that will influence and inspire future generations.

But for Housatonic artist Gabrielle Senza, much of the meaning in her latest work is derived directly from its impermanence.

“Terra Temporalis,” Senza’s new installation at Y Bar in Pittsfield, is a drawing of a natural landscape that will exist in the world for exactly one year, before the artist paints over it and replaces it with another site-specific piece concerning a similar theme.

In fact, Y Bar proprietor Jim Benson has commissioned Senza to create three successive artworks on the four walls of a small corridor, each to last for one year. The impermanence of nature is at the essence of the project — particularly nature that is threatened by human civilization.

“The drawing, like the Housatonic River, will be destroyed and its beauty stolen forever,” Senza wrote pointedly in her proposal for the project.

For each drawing, she applied graphite powder by hand to create a tree-laden natural landscape. And each piece was created with an internal expiration date, a time that it would be painted out and become just a memory.

Graphite itself is the lightest form of carbon, Senza said.

“What grabs me about the piece is that it’s temporary, and that it’s made by hand using carbon, in the same way that oil is derived from carbon,” Benson observed, pointing out the four red walls at Y Bar before Senza had a chance to get her hands (literally) on them. “In this case the artwork is temporary, whereas with oil and other natural resources, those seem fleeting and temporary as well.”

Her graphite drawings are rendered realistically but possess an ethereal, haunting air — an intangible lightness. Her choice of graphite, a lighter shade than charcoal, supports this effect. And though she is long-accustomed to creating pieces by hand with oil sticks, it is surprising to learn that the Everhart Museum commission marked her first time working with graphite powder.

Applying graphite powder directly onto a white wall by hand is a potentially unforgiving scenario, with little room for error.

“It’s so different from working with paint, because there’s such a direct relationship with the material,” she said, seated in her Housatonic studio. “Powder, hand, wall — there’s no brushes; there’s a real direct connection there.”

Though the medium is different, she built upon the distinctive technique she’d developed with oil sticks.

“You have to be super careful,” she said, “because you can mess up really easily if you start doing things mechanically or get distracted.”

The process suits the deep connection she feels to the subject matter, nature, she said.

“I do feel a tremendous amount of angst when I’m trying to represent nature, because I care about it so much and I don’t want to do it an injustice by doing it poorly,” she added.

Coming after her mural at Everhart Museum, she created the wall drawing at Sanford Smith after the opening of her show there, partly to “bring that project back to the Berkshires from Scranton,” she said.

She posted photos and updates from the week-long drawing process in Pennsylvania on her Facebook page and personal web site, but she wasn’t satisfied with just showing photos to her friends.

Benson saw the mobile phone photos of the museum drawing and fell in love with it. It was only some weeks later, he said, when he was launching the soft opening of Y Bar in August and noticing the space available on those four red walls, that he realized there might be a connection to be made.

“I think I’m only figuring this out as I go along, but I like to take spaces and figure out what to put in them,” Benson said, perhaps with a touch of understatement. “I like having a concept, but then I love handing it off to an artist and letting them interpret the vision or expand the concept. She’ll paint right over it a year from now and do another one, and do another one after that. I love that.”

Where: Y Bar at 391 North St., Pittsfield, where it will remain for a year.