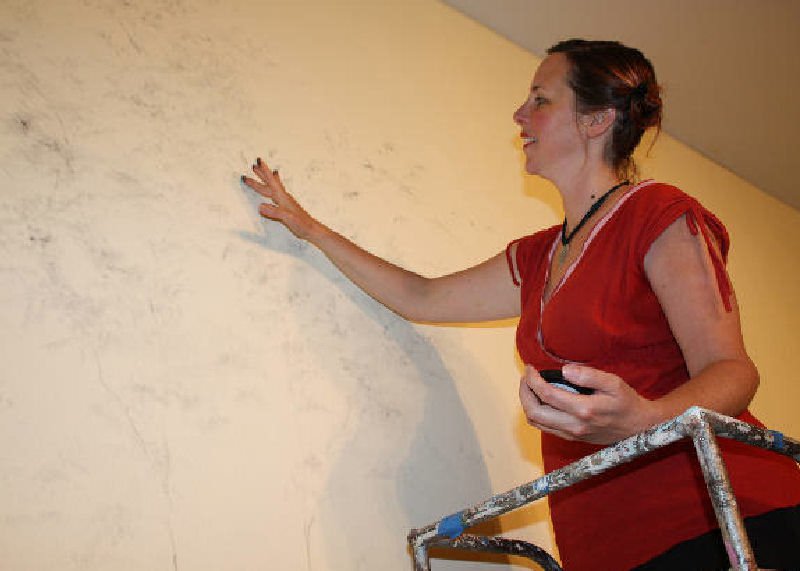 SCRANTON – It is common for an artist’s work to be brought into the Everhart Museum, but for its new exhibit, Gabrielle Senza is doing something special, letting her work’s life cycle begin and end at the Scranton museum. 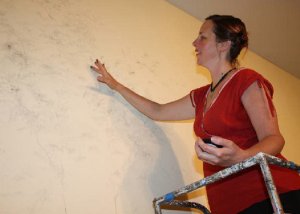 Artist Gabrielle Senza shows the powdered graphite she has applied to her hand to create a wall drawing called “Terra Temporalis” for the Everhart Museum’s latest exhibition.

Gabrielle Senza is shown above working on a temporary installation, which will be unveiled Aug. 12, as part of “Buds, Blooms & Berries” at the Everhart Museum.

Senza is working on a temporary installation, which will be unveiled August 12, as part of “Buds, Blooms & Berries,” the museum’s newest exhibit.

The Berkshire, Massachusetts-based artist will create the work, entitled “Terra Temporalis,” on one of the gallery walls, measured at 11 by 17 feet.

“I’m doing the whole thing in graphite powder. It’s intended to be very ephemeral, kind of now you see it, now you don’t, which has a lot to do with the theme of the piece,” said Senza.

“It has to do with the temporary nature of things, specifically the environment, and how vulnerable it is.”

In the spirit of that temporary theme, the wall will be painted over when the exhibit comes to an end Dec. 31.

Senza is one of several artists included in “Buds, Blooms & Berries,” a multi-disciplinary exhibit highlighting the Everhart Museum’s scientific collections and its historic Twining Herbarium, ethnographic materials depicting plants and trees, and contemporary art reflecting how botanicals impact today’s societies and mindset will be on display.

Everhart curator Nezka Pfeifer contacted Senza about participating in the exhibit, originally looking for her to exhibit a piece of work. But the artist had other ideas.

“I said, ‘I’d love to be in the show, but actually, really, there’s something I’ve wanted to do for a while, and that is a temporary wall drawing and this would be, perhaps, a really nice opportunity to do that,’ and she got really excited, and the rest of the staff were into it,” said Senza.

With everyone on board, the two went to work on finding a way to finance Senza coming to Scranton to work on the temporary installation, and decided on using Kickstarter.

Kickstarter is a funding platform for creative projects where project creators keep complete ownership and control over their work.

Those interested are then able to donate funds to projects of their choosing.

“The Kickstarter method was very exciting, because it just gave so many people an opportunity to participate in some way,” said Senza.

“It’s such a feel-good kind of situation, it’s sort of win-win for everybody, because it’s really about community and collaboration. You don’t have to be a rich philanthropist to make something like this happen.”

Those who donated funds to the temporary installation will have the chance to view the piece beginning this week, as well as the work of contemporary artists that will also be on display.

The exhibit will also feature an outdoor Pollinator Garden with plants donated by The Lands at Hillside Farms.